Guy Smiley, aka Gov. Mitt Romney, appeared on Morning Joe with Joe Scarborough this morning a 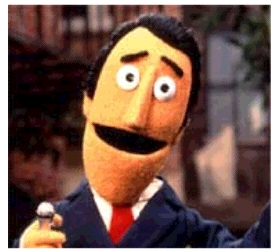 nd just kept lying.  Joe pressed him on McCain’s campaign of deception, reminding Gov. Smiley that McCain had distorted the Gov.’s own words on the Iraq war during the primary.  The Gov. deflected until pressed to admit that McCain had stretched the truth, but held the line on McCain’s sex ed ad, saying that Obama wanted to teach sex ed to five year olds.

You know that things are out of hand when you have Jim Henson’s troops lying for you.