Here are some of my favorite / some of the most interesting things from around the web this morning after the debate:

1.  An MSNBC poll shows that Obama won the debate, 52% to 34% (as of the time that I voted).  What is really astounding to me about this poll is that, by the time I voted around 7 AM CT, over a half a million people had participated.

2.  From Jane Hamsher of Firedog Lake:

McCain really has nowhere to go except to get more obdurate and bellicose.

3.  I love it when the press gets things wrong.  I listened to Chris Matthews say last night that McCain didn’t look at Obama once, “not once,” during the debate.  That’s actually not true.  He did look at him once … just once … review the tape.  Here’s an inaccurate quote from the AP’s Liz Sidoti:

At another point, after Obama repeated a comment: “Were you afraid I couldn’t hear you?”

The quote was actually, “Were you afraid I couldn’t hear him?”  McCain was asking the question of moderator Jim Lehrer after Lehrer asked Obama to direct a statement directly at McCain after Obama already made it to Lehrer and, ostensibly, the audience.  Obama complied and that’s when McCain asked the question.

4.  Biden on Olbermann last night.  This was a great interview, but a couple of things I loved:

a.  Keith asking Biden about McCain’s attempt to liken Obama to Bush (what?) ; and

b.  This great quote from Biden on his debate with Palin.  Biden was saying that he wasn’t going to do the condescending crap that McCain did at the debate with Obama, trotting out his travels around the world. Biden emphasized that he has been to all the places that McCain has been, often at the request and invitation of the leaders of the hot button nations, and then saying:

Just because I was there, doesn’t make me right.

But women voters tended to give Obama higher marks, with 59 percent calling him the night’s winner, while just 31 percent said McCain won.

This is a key demographic that everyone’s been watching.  This could be very good news for the Obama camp.

6.  Finally, just because I think it’s worth a guffaw, note which candidate in this photo is wearing a flag pin: 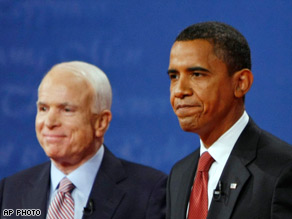 McCain and Obama at the first debate

I won’t go through all the historical context for the joke.  I hope you get it.

2 responses to “The morning after”