What to make of today?

Today’s just been all over the place.  First, the good news … or what I see as the good news:  Obama is up 8 points in Rasmussen’s latest daily tracking poll:

This is the highest level of support ever recorded for Obama and is his largest lead of the year. It also continues a remarkable twenty-five days in a row where the Democrat’s support has never declined by even a single point. The Democratic candidate has gained six full percentage points of support since Lehman Brothers collapsed to start the Wall Street mess.

Speaking of Lehman Brothers makes me think of the economy, and now that we have the good news out of the way, let’s look at this:  the market closed below 10,000 at 9,962.03, putting it down 363.35 for the day.  Granted, things were a lot worse around 2 pm Eastern when the Dow was down a whopping 800 points, but this is bad, y’all.  Guess the bailout wasn’t all that, huh?  International markets are tumbling, too.  And CNN is reporting that 60% of Americans think a depression is “likely.”  Most economists don’t agree, but if the mood of the country is that bleak, something’s amiss and it can only make things worse (ya know, folks won’t spend and the vicious cycle continues).

And what is the McCain camp doing in the face of this?  That’s right, they’re talking smack about Obama.  And while on the campaign trail talking smack, Sarah Palin lets loose this one:

There’s a place in Hell reserved for women who don’t support other women.

Yeah.  She read it on a Starbucks cup.  Let that sink in.

She was misquoting Madeleine Albright, who said this:

There’s a place in Hell reserved for women who don’t help other women.

No, Starbucks didn’t get it wrong, Sarah did.  Don’t get Ta-Nehisi Coates started.

So there you have the good, the bad, and the truly ugly of this Monday, as far as I can tell.  Yes, there’s so much more and I’ll be back around soon to share it.  If you have any of your own, feel free to drop a line.

Filed under Sarah Palin, The Economy

Text of the “Rescue Plan”

If you’re super duper interested, here are all 451 pages of the text of the Senate “Rescue Plan,” er “Emergency Economic Stabilization.”  Go to it.  (Note: it’s a pdf.)

*Quick note:  I just have to add that I love that this has been shoved into the Mental Health Bill.  I hope the irony isn’t lost.

Filed under political cartoons, The Economy

I have MSNBC on in the background and John McCain is giving speech in MO.  He just caught my ear with this:

We will stop sending $700b a year to countries that don’t like us very much.

What about Iraq, John?  They don’t like us very much.  As recently as March, 61% of Iraqis said that our presence in their country was making things worse.  So let’s stop sending them money, and troops, and weapons.  Let’s spend that money here and bring our troops home before any more of them die.

Here’s another quote from the same speech:

It’s time to show the world again how Americans lead.

I can’t keep up.  Now he’s talking about how he would lead without needing to take credit.  What the hell was last week, then?  What the hell was “suspending” his campaign to rush back to DC to help solve the crisis about if it wasn’t to take credit?  Come on, John, do you really take us for a nation of idiots?  Do you think we have collective amnesia?  <sigh>

Why don’t I feel all heroic and stuff?

Filed under political cartoons, The Economy

I hate this kind of crap.  Here’s what happened, as far as I can tell:

Wednesday morning:  Without talking to the press, Obama calls McCain and suggests that they issue a joint statement on the economy.  Obama, who is *leading* in the polls on this issue (and in general, I might add), had nothing to gain on this.  He thought it was the right thing to do and was reaching out to McCain.

Wednesday afternoon:  McCain calls back to say, “Great idea.”  McCain, who has everything to gain from this, then one ups Obama and ALERTS THE MEDIA that he will be suspending all campaigning after Thursday when he will return to Washington to “focus on the nation’s financial problems.”  And oh, by the way, he suggests that he is reaching out to the Obama campaign to try and reschedule Friday’s debate so that everyone can stay focused on the economy.

What bullshit.  McCain has now put Obama, who originally reached out to him out of goodwill, in a no win situation:

1.  Say “yes” and appear to the average, non-think-for-yourself American as if he is following McCain’s lead; or

2.  Say “no” and appear as if he is choosing politics over the good of the American people.

McCain’s a jackass who, incidentally, still wants three debates.  This debate schedule was agreed to *last* November, folks.  Tell me where they’re gonna stick in another one.  And tell me who’s gonna pay for all the logistics to reschedule this one?  And what about the citizens who have tickets?  And the journalists and bloggers who are scheduled to cover it?  What about their economy?

I know, I sound harsh, but there’s a lot to think about here.  And I think John McCain is simply grandstanding.  He’s trying to score political points, trying to seem concerned to distract attention away from the fact that he has no plan to solve this crisis.  He had a disastrous week last week in which he called for both the firing of the chairman of the SEC (which the Pres can’t do) and the resignation of the head of the FEC (what?).  He was against regulation before he was for it.  It was bad and now he’s trying to figure out a way to crawl out of that hole with these antics.  We shouldn’t let him get away with it.  This is the equivalent of the flag pin.  Don’t let it distract you.

There’s a place I love to shop.  It’s called Etsy, and it’s an online marketplace billed as a “place to buy and sell all things handmade.”  My favorite jeweller, lilleyella, is there, as well as a host of other really cool artisans.  Every so often (like many times a day), they change the featured items on their homepage.  This morning, this was there: 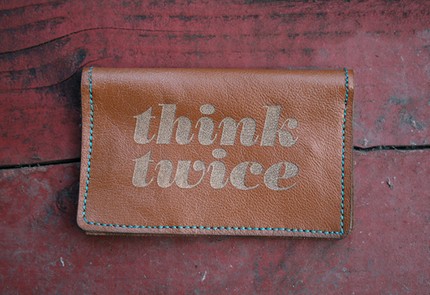 In light of our current financial crises, maybe everyone should have a wallet that reminds them to, “Think Twice?”  Click the wallet to see the item at Etsy.com and explore the seller’s (treeswithknees) shop.